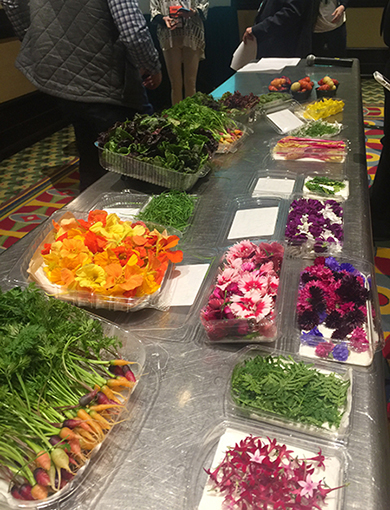 The International Association of Culinary Professionals (IACP) is a conference where food writers, cookbook authors and a wide range of culinary professionals gather to be inspired as they discuss and debate issues related to the impact of food on modern culture and lifestyles. This conference establishes the framework for the culinary conversation of the year ahead.

Food Halls are curating urban environments into modern culinary villages, making it convenient for consumers to enjoy the offerings of local artisan vendors. According to a new Culinary Visions® Panel survey 62% of consumers surveyed in a nationwide study said they love the collaborative energy of a food market.

Oxy-modernism™ describes the trends that are creating the future of the food industry, where cultural contradictions are driving innovation.

Veg-Centric and Carnivorous Cravings – Chefs and cookbook authors inspire Americans with new and delicious ways to enjoy their vegetables; yet, the average person eats three hamburgers a week.

Foodies Do Not Necessarily Cook – Americans are among the most food literate consumers in the world; yet, they cook less and eat out more often in restaurants.

Local is Not Sustainable – There is rarely enough business within a 150 mile radius of a farm. Global demand for specialty produce creates business opportunities for farmers that are necessary to survival.

Global Prestige Brands and The Cult of The Maker – Mainstream consumers appreciate the prestige of global brands best in class for specific products, while the smallest producers enjoy a cult following among consumers who thrive on the secret find.

Americans spend less time cooking and eating than any developed country, according to a global study by Allrecipes.com. Gobble Gulp and Go was used to describe American food culture, by a noted author who discussed the insatiable desire for convenience.

The Evolution of Training – in today’s food business, training has become more about sharing and taking people on a culinary journey they can embrace rather than teaching.

Misused Words – organic and local are considered the most misused words in the food industry today.  Alternative words should be considered to engage customers with a brand or business.